SYFS INVOLVED WITH THIRD SERIES OF ‘FILTHY RICH AND HOMELESS 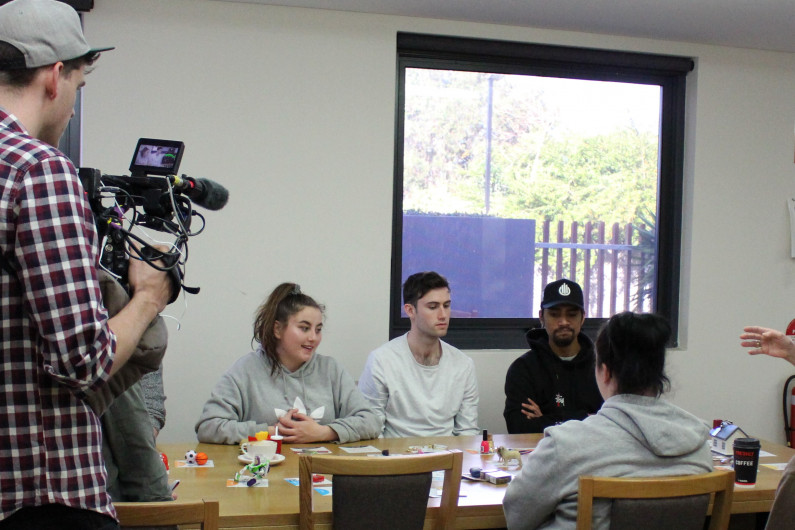 SYFS INVOLVED WITH THIRD SERIES OF ‘FILTHY RICH AND HOMELESS

The critically acclaimed third Series of the documentary ‘Filthy Rich and Homeless’ has just aired on SBS and after consulting on the second Series, SYFS was this time invited to be directly involved by housing one of the privileged Australian participants at their Illawarra Youth Foyer Service. Young Comedian and Radio Presenter Ciaran Lyons spent 6 days at ‘Foyers’ in Warilla last year and described his overall experience on the program as ‘life-changing’.

The documentary series created by multi Award Winning Blackfella Films, takes 6 privileged and well known Australian identities out of their normal, comfortable lives and onto the streets to experience the plight of the 116,000 Australians currently classified as Homeless. The participants all experienced sleeping rough on the streets of Sydney and Regional Areas of NSW including the Illawarra, as well as a taste of life in Crisis Accommodation Services, Boarding Houses and Caravan Parks. It’s important to note that most of those classified as homeless in Australia don’t sleep on the streets with the majority forced to live in insecure and inadequate accommodation for short periods of time before moving on to the next option.

After spending time at other Crisis facilities Ciaran described the unit he was given to stay in at the SYFS long-term housing service as more like a ‘hotel’, such is the level pride and value SYFS seeks to install in all of the people who use our Services. During his stay at Foyers, he also undertook some of the budgeting and life skills programs provided by SYFS to the young people and was amazed to discover how little money young people had to survive on the Government’s Newstart Allowance of just $550 per fortnight. After working out his usual expenses, Ciaran realised he would actually be $1100 per fortnight short if he was relying on Newstart to survive. Then after removing his usual expenses altogether he the found he would have just $17 per week to live on after rent and came to the realisation that living like this is like trying to ‘solve a puzzle that isn’t solvable.

While the entire series is confronting and thought provoking, perhaps the greatest impact comes from the participants spending time with homeless people and those living in Crisis Accommodation. Simply to hear their stories and gain some level of insight into the challenges they have faced and continue to face is enough to completely shatter stereotypes and widespread misconceptions for life. One statistic to support this is that two thirds of all homeless people have experienced some form of physical or sexual abuse as a child. Some of the most powerful and profound learnings that the participants took away from the experience and from listening to vulnerable people tell their stories is that homelessness is not a choice. The ones that are suffering are real people, like you, I or anyone else. As human beings they deserve much better and the system has and continues to fail them in some way.

This is not in any way to take away from all of the terrific agencies and organisations like SYFS who do so much to help improve the quality of life of our most vulnerable, but it is to say that while they can often help, support and provide respite to those at risk, there needs to be a far greater level of understanding, advocacy and action around social care, income security, social housing, and affordable housing in order to solve or even significantly reduce the problem of homelessness in this country. In NSW alone the number of people aged 19-24 without a home has increased by 117% over the last decade. Add to this the severe lack of housing options available with waiting lists of 10 to 15 years for Government Housing and we can see how it’s very possible that anyone could get stuck in what would feel like an entirely hopeless situation.

In amongst all of this however, there are glimmers of hope to illustrate just how much difference help and support provided by Community Services like SYFS can make. Case in point is the story of Aaron and Kayla highlighted in Episode 3 of Filthy Rich and Homeless. Having been together since high school this couple found themselves sleeping rough for a year as teenagers before being offered temporary accommodation and then ultimately being approved for an Independent Housing Program property with SYFS. Despite typically difficult backgrounds involving family breakdown, foster care and homelessness, the couple now has their own unit in Wollongong which brings with it a sense of security, stability, self-esteem, responsibility and independence.

With the support of SYFS, Kayla is now continuing her studies and Aaron after completing his Cert 4 in Business Management was offered a Traineeship in Administration with SYFS and now works at their Head Office. He is also now very passionate about making a difference to homelessness in Australia and is committed to applying his knowledge and experience to be a part of the solution.

Deputy Lord Mayor of Melbourne Aaron Wood and well known Emergency Doctor and Businessman Andrew Rochford also participated in this series and both said they have been ‘fundamentally changed’ by the experience and understanding they have gained. As programs and initiatives such as this continue to raise awareness and education levels around homelessness in Australia perhaps the final word should go to Homelessness Expert Dr Catherine Robinson who said ‘Homelessness is never a choice, yet we could choose to end it’. As individuals, we must challenge ourselves to act. It is the responsibility of all us.